A little over ten years ago, on June 7, 2001, then-President George W. Bush signed a law to cut taxes for American citizens under the promise of prosperity. However, in reality, it cost the government $2.5 trillion over the next 9 years, and ushered in an era of abysmal economic growth.

ThinkProgress.org recently posted an article detailing exactly what this has meant in terms of what the Federal government could have spent that money on. Among other options, we could have:

The first option might have come in handy this year as wildfires have ravaged 12 states, including 58 fires currently burning – the worst of which is a record-breaking fire in Arizona. According to the US Forest Service, “the number of acres burned [this year] is three times that of the 10-year average.”

The third and fourth options would not only help fight Climate Change, but it would also reduce America’s dependence on foreign oil — something that all of our last 8 Presidents have advocated for the past 30+ years, but none have been able to permanently accomplish.

Perhaps the tax cuts might have been worth it (but still probably not) if they had actually promoted economic growth… but they didn’t. In 2008, Ezra Klein created a chart (below) based on Dean Baker’s analysis, which shows that economic growth under W was the 2nd worst of any recent President. (The worst was under his father). 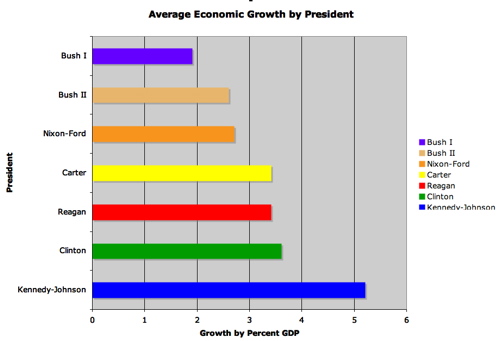 The tax cuts for the wealthiest 2% were extended at the end of 2010 as part of a compromise Obama struck with Republicans. While this is largely viewed as caving (myself included), it is important to remember that Republicans flat-out refused to tackle any other issues unless Democrats allowed the tax cuts to be extended. Republicans argued that increasing taxes on the wealthy during a recession would stifle recovery, because the rich (as job-creators) would use the money they weren’t spending on taxes to do things like hire more workers.

Have the wealthy used that money to hire more workers? Not really. When the extension was signed in December 2010, national unemployment was 9.4%. As of this May, national unemployed has dropped only slightly to 9.1%. According to an article in the Huffington Post: “the payroll tax cut enacted in December hasn’t spurred the additional consumer spending that many economists expected. Americans have had to spend most of the extra money to pay higher prices for food and gas. The economy grew by only 1.8 percent in the January-March period, a sharp slowdown from the 3.1 percent annual pace in the October-December quarter.”

So if they aren’t creating jobs, what have the wealthy been doing with their tax savings? In an article in the Huffington Post, the group “Patriotic Millionaires”revealed that they have used the tax savings to do many frivolous things, including: traveling, buying larger boats, and adding dance floors & parking lots to their mansions.

A few related articles worth reading: